In Reflections, story mirrors your decisions.

The real-world adventure game from Broken Window Studios is rocketing to the top of Steam Greenlight, having already cracked the top 100 after going live last week. It’s targeting an April release on PC, with a PS4 and Xbox One version confirmed to be in the works.

However, Reflections separates itself by giving you more impact on the story, a dimension past titles have lacked, Moore said.

“It’s almost like a personality quiz,” he said. “Your choices say something about where your priorities are.”

The game puts you in the shoes of a young adult getting ready to leave home and start life as an adult. You have until the end of the day to pack your things, say your goodbyes or simply go exploring. The choices you make on how to spend your time will shape the rest of the game through Reflections‘ unique Storyteller engine. 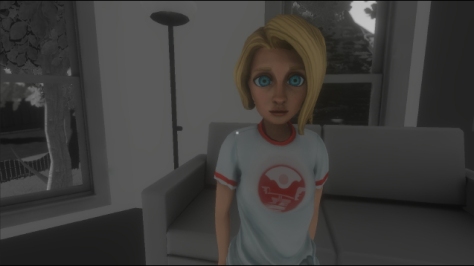 “We’re focusing on actual interactions with the space rather than a dialogue tree or something like that,” Moore said. “It’s an abstract game because it’s not about traditional gameplay mechanics.”

The game allows you a set time to interact with the environment, meaning you can’t do everything in one playthrough. Much like life, you’ll have to make sacrifices, and those choices will define you.

“It’s not the kind of game that waits for you to finish,” Moore said. “There’s a timetable for each act… and the game moves on whether you’re ready for it to or not.”

Reflections uses color to highlight interactions you make with the environment. A black and white scene will fill with life as the story progresses, with a basketball turning orange after being shot through a hoop or a family photo gaining vibrancy once it’s placed back on the shelf.

Like most games in the genre, Reflections is on the shorter side, with a full play through lasting less than two hours. However, Moore said that it offers a fresh experience on a replay, as the game’s many different outcomes can’t be explored in just one sitting.

Moore recognizes that games like Reflections have been criticized in the past, with many questioning whether such titles can be called “games.” He realizes that not everyone enjoys more experience-focused titles, and he even admitted to feeling a little of that sentiment while playing Gone Home and Dear Esther.

“I played those games with the idea that I wished something else could happen,” Moore said. “I can’t say that Reflections will appeal to everyone, but I want it to satisfy a part of that experience that didn’t really fulfill itself in those games.”

Moore originally designed Reflections in 2012 when he was going through the same experience as its protagonist.

“I had just graduated from college, and I was sitting there trying to figure out where my life was going,” he said.

That was before the genre seemed viable, so he shelved the project at what he said was about 60 percent completion. He decided to pick it back up because the genre had become more popular and he felt he had something to contribute to it.

Broken Window Studios’ other title in development, Grave, also played a role in the decision. The horror survival game has grown in scope since its backing on Kickstarter, which means it’s requiring more resources. Moore said he hopes to help fund the development of Grave through Reflections‘ release, but he also wants to flex his storytelling muscles.

“A lot of the stuff that we’re doing with Reflections is going to feed into Grave in different ways,” Moore said. “Grave‘s story is not going to be linear, and it’s going to be using the storyteller system.”

In the long run, Moore hopes to encourage more interactive storytelling in games and not common linear paths.

“I want to see games get better at telling systemic narratives rather than just decision trees and linear progression,” he said, “and this is my attempt to do that. I’m just hoping that people will see in it what I see in it.”